Manage cryptocurrency fraud and mitigate the associated risks with these insights. 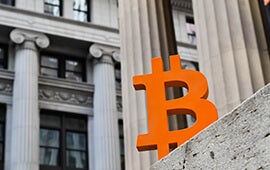 The incredible volatility of cryptocurrencies and the uncertain regulatory landscape of crypto-assets are creating a fertile ground for fraudsters to target crypto platforms. Losses from crypto-related crime rose 79% in 2021 compared to 2020, with scams being one of the most pervasive type of fraud targeting cryptocurrencies.

Altogether, it’s estimated that scammers reaped $14 billion from cryptocurrency-related fraud during 2021.
Here are some of the main schemes that target the world of cryptocurrencies:

This scheme, which is very common in banking, is also used on many crypto exchanges to defraud victims and steal their confidential data. Phishing, a type of social engineering attack intended to trick victims into revealing their data, allows cybercriminals to access victims’ accounts and wallets and steal their funds.

In this scheme, cybercriminals create a website that is identical to the original. It’s usually an exchange, online wallet or official ICO web site. Cybercriminals promote the cloned website through social media and networks, including emails, chats and Google ads that supplant the real website’s identity. They also include a fraudulent link through which an attacker can easily obtain a victim’s credentials. In addition to cloning websites, cybercriminals also deploy false apps that imitate the legitimate apps.

In this scenario, fraudsters deceive victims by impersonating the support team of a company’s legitimate website and sending emails to clients with the company's logo to announce an event. They ask for private data to “help” the clients, but they steal their information. It’s important to know that no platform will request a client's credentials because, among other reasons, they already have them.

This type of scam consists of inflating the price of a cryptocurrency through fraudulent or false information published in online communities, forums and social networks. Investors are encouraged to buy and hold the cryptocurrency because, according to the cybercriminals, they could make a lot of money in a short time. When the cryptocurrency reaches its peak price, the fraudsters cash in on the profits and the price begins to fall. Investors attempt to sell quickly to minimize losses. However, the asset price plummets at a dizzying speed, thus generating significant losses.

Under this scheme, new cryptocurrency projects appear on social networks or channels. These projects don’t really exist or are created only to make the most money as quickly as possible, and then they disappear.

New cryptocurrencies are usually launched in the market through an initial currency offering, also known as an ICO (Initial Coin Offering). This is a financing scheme by which a company can raise funds from high-liquidity cryptocurrencies, such as Bitcoin or Ethereum, through the massive sale of the new cryptocurrency that is about to be launched. Start-up companies sometimes launch ICOs, which raises doubts as to whether the offer is real or a scam.

This is a scheme in which a platform builds trust from investors and works well for some time until the operators block withdrawals and flee with their clients’ money. Some of the seven largest Bitcoin scams in history were perpetrated using this method. Platforms aren’t always created for scams. Sometimes fraud occurs due to business problems the persons in charge are not able, or have no wish, to solve, and they go for the easy way out – take the money and run.
Fraud Mitigation for Businesses Dealing in Cryptocurrencies 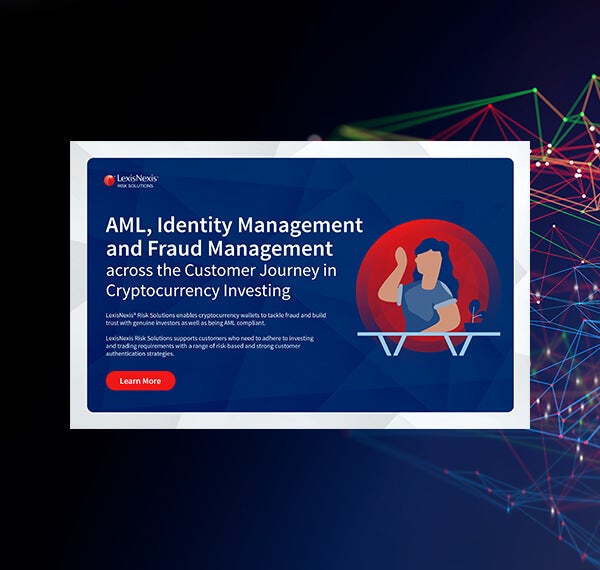 LexisNexis® Risk Solutions combines digital fraud prevention and detection, as well as user identity verification and authentication to mitigate cryptocurrency fraud. Complete the form on this page to download the illustrated “Cryptocurrency Customer Journey Flow” and uncover the fraud risks specific to each touchpoint and how LexisNexis® Risk Solutions can help mitigate crypto fraud across the customer journey.

For more information on crypto fraud read “Is This the Golden Age of Crypto Scams?”, an insightful interview with Dr. Stephen Topliss, vice president of Fraud and Identity at LexisNexis® Risk Solutions and see the webinar “Threats to Global Security Webinar Series - Role of Cryptocurrency and Cybercrime” were industry experts explore crypto cybercrime challenges and ways to combat them.
Financial Services Corporations and Non-Profits
Identity Fraud

Complete this form to download the Cryptocurrency Customer Journey Flow